There is a saying that a mom is only as happy as her saddest child. We just cannot help it. From the moment we knew we were expecting we began to worry about them. We were determined to take care of this precious child. When they finally arrived our education into parenting really began. Life was not all sweet and cuddly. There was vomit and poop and nights without sleep. Later on there would be defiant toddlers and tantrums in the grocery store. But we still powered on determined to raise happy and healthy children.

Just like labor hits you like a ton of bricks, adolescence can be like being run over by a MAC truck. Sweet children become snarly, defiant teenagers. Some of us avoid this stage, but many a mom has lived through several years of limited conversation as their teenager grapples with the hormones and stress of breaking away. Because we are wired to leave home and grow up. It is a necessary part of growth. And some kids have to do it in a dramatic and sometimes painful manner.

I get messages all the time from moms who are heartbroken because of the behavior of their military sons and daughters. They feel rejected and hurt. While basic training does a lot to bring out the best in our kids, it is not magic. The ragged process of stepping away from home and becoming an adult can sometimes mean that moms are rejected-for a time. It is hard to take especially when you have the same feelings of loss and worry that come with the territory of being a military mom.

I was a biology teacher so I see things in a bigger picture. Many things we humans do are similar to other species. When a baby bird grows up and is having a hard time leaving on his own, they will start pooping in the nest. This “fouling the nest” is a way to get Momma bird so ticked off she will kick him out. He could not quite manage it on his own.

Maybe you have a kid who has been fouling the nest. He or she cannot seem to treat you with respect of caring. In many cases it is because they care too much and have to reject the “mom” part of you to really separate. So what to do?

Step back. Try to treat them as you would another adult with no expectations. Don’t set yourself up to be hurt. Don’t beg for phone calls or texts. Send notes, don’t give advice or tell them what to do. Give them time to grow up. Scientists now know that most adolescent brains do not fully mature until the late 20s and boys are slower to grow up than girls. ( We moms already knew that.) So be patient. Hopefully they will grow out of it-most do. And while you wait find something to do with that mother energy. I know it is hard. But you are not alone and there are a lot of happy endings. Really. I promise. Be wise and wait for them to fly back strong and mature. It’s what we all really want-oh yes and a phone call now and then. 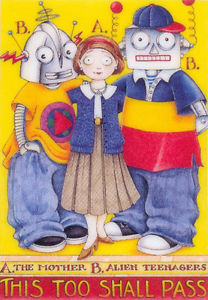 One of my favorites from Mary Englebreit