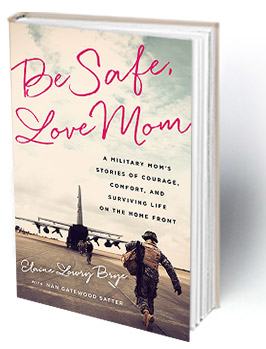 About the BookPraiseBuy the Book

It’s the first time the six of us have been together in more than three years, and we are all giddy with excitement. My four uniformed children—Eric, Jordan, Katrina, and Brendan—are crammed together side by side on the cabin steps in preparation for a new family portrait, and they are laughing so hard that one of them has turned beet red and another is doubled over and holding his belly. Just like when they were little kids in the back seat of the car kicking and pinching each other, there’s lots of physical contact. Except now, decades later, the punches in the arm, slaps on the back, and constant jostling are signs of affection rather than of squabbling. I close my eyes and am transported back to earlier days when they would tumble and wrestle together like a pile of puppies. “Somebody’s going to start crying soon,” I’d yell, and moments later, just as predicted, a tearful wail would rend the air.

Now, their hilarity interrupts my reverie. I am pulled onto the steps and teased mercilessly while my husband, Courtney, stands by, arms crossed, looking happy and proud.

In our family, connections of the heart are not expressed through long soulful gazes and earnest “I love you’s.” I know, and so would anyone watching, that all of the teasing and tussling of this joyous reunion weekend are expressions of my family’s deepest love. And as my children press in next to me in their mottled camouflage— each uniform different, for each child serves in a different branch of the United States military—and their raucous rivalry escalates, I am in bliss.

The tangible reminder of this bliss—the latest treasured family portrait—will go on the staircase wall next to all of those happy images from my kids’ childhood and teenage years—years when they were never too far from the nest; now, I glance down at their standard-issue boots and am amazed to realize that the dust of so many distant lands has been tracked all the way to the cabin we have rented here in rural Idaho. And on the days when having four children in the military seems to demand more strength than I possess, the love and delight radiating from this photo will strengthen my mother’s heart and be my ammunition against despair. I need this photograph, this ammunition—oh, how I need it. Because I don’t know when—or if—we will all be together again.

Although you and I most likely have never met, we have the privilege of sharing our child—or in some cases, children— with this great nation we live in. As they do their duty, we do ours. And sometimes it can be lonely here on the home front. Believe me, I know.

I know because I’ve spent a lifetime living with and loving those who serve our country. As the daughter of an Army colonel and the mother of four military officers, I know what it’s like to have those you hold dear in harm’s way. My husband is a former Air Force pilot, and I, too, have served. And now I have the perspective of someone who has lived in a war zone, even if not on active duty. From July of 2010 until May of 2011, I lived in Kabul and taught at an English-speaking school. It was a life-changing experience.

As a moderator of the US Naval Academy (USNA) Parents Listserv since 2001 and now a USNA parents Facebook administrator, I have been supporting Naval Academy parents for almost a decade and a half. Over the years, my fellow moderators and I have answered the questions of thousands of parents who are anxious and worried when their child ships off to the Naval Academy, and beyond that, who are completely lost when it comes to having a child in the military. I have heard their concerns—concerns you may share, and that I have shared and in some cases still share—and I continue to consider it a privilege to meet these parents and to answer their questions and allay their fears. I have often learned about courage and duty and letting go the hard way, particularly as they relate to having children in the military, and if I can pave the way for you and save you a little pain, it would be my honor and pleasure to do so. Because we are related, you and I. We are bound together by our love of our children and their calling to serve.

I was born to be a military mom. It just took me a few decades to realize it.

As the oldest of seven children, I spent a great deal of my adolescence proclaiming that I would never have children. “I’ve changed enough diapers and burped enough babies and wiped enough runny noses for a lifetime,” I’d declare to anyone who even casually brought up the subject of motherhood. “I’m done with all that.” Over time, love and biology made me reevaluate my teenage vow, and eventually I became a mom to four. My nephew later joined our brood for a grand total of five lively youngsters. All that early caregiving experience made motherhood a natural job for me.

And the military descriptor? I come by that naturally, too.

I am an Army brat, born at Fort Meade, Maryland. In my first eighteen years we moved seventeen times and I attended twelve different schools. Each of us seven kids was born in a different state. Watching the Miss America Pageant was, for us, a sibling competition—we each rooted for our birth state contestant. Growing up in an environment of ceaseless change meant that the only constant was family, which mostly meant my mom and siblings. Some years ago I added it up; my dad was gone for a total of seven years over the course of the turbulent Vietnam era, the backdrop for my childhood and adolescence.

By the time I was in my mid-twenties, I had married a handsome Air Force pilot named Courtney Brye, whom I’d met as a result of my own Air Force ROTC training. Courtney’s childhood was the polar opposite of mine in terms of stability. He grew up on a farm that his grandfather had homesteaded in North Dakota—his mother, in fact, still lives on that farm—and he knew everyone within a ten-mile radius. After leaving the military, Courtney proposed that we raise our children on a farm, and I loved the idea of rooting our family in one place. We found our dream spot in eastern Ohio and settled in to tend to kids and cattle.

It’s funny how things work out. We purchased a farm with the idea of providing stability for our children (not to mention all the lessons that farm life provides), and now, thirty years later, they are spread all over the country, and occasionally around the globe. They’ve all chosen to dedicate themselves to lives in the military, which for them means lives in perpetual motion, and for me means a return to my change-is-constant roots.

If you had told me as they were growing up that this is where we’d end up, I would have looked at you as if you were out of your mind. Our four children are very different, with distinctly individual personalities and ambitions. We never dreamed that three of them would attend the same college, the US Naval Academy. And we certainly never expected that all four would become commissioned officers.

It was not a stretch, though, to imagine that Eric, our oldest, might follow in his father’s footsteps—or flight path—and become a military aviator. He soared over every hurdle in the USNA’s admissions process, and when he stepped onto its campus in July of 2001, I found myself a military mother. It was vast, uncharted territory. I knew how to be a military kid, but to have a military kid was a completely different matter. As I began to grasp the degree to which I would have to let go of my son, I was overwhelmed with grief and anxiety.

Is it any wonder, then, that I quickly found myself exchanging dozens of e-mails a day with other new military parents via the Naval Academy’s Parents Listserv? What began as a survival tool for my first summer as a military mom has developed into years of support for thousands of fellow military parents. First as an anxious plebe mother, then as a moderator of the listserv, and now as a blogger, speaker, and military parent Facebook page administrator, I have been privileged to meet someof the finest parents that walk this planet. Their dedication to their children, their unsung heroism, and their personal sacrifices inspire me every day. And I have also come to know their children, who I’ve watched develop into warriors and leaders of the highest order. I have heard stories of courage beyond comprehension, determination beyond description, and heroes made both at home and on the battlefield. Now, with four children in the military—all officers, one each in the Army, Navy, Air Force, and Marines—well, I have earned my stripes as a military mom. I grew up as a little girl saying goodbye to my father over and over again, and now as a mother I repeat this process in reverse, saying goodbye to my children time and time again.

It’s just what we do, we military moms and family members, for our loved ones and for our country.