There’s a lot of turbulence out there in the world right now. More troops to Iraq, rumblings of Russian aggression, another North Korean missile test, and missile attacks on a Navy ship. It is enough to make an ordinary citizen who is paying attention stressed out. But if you are a military mom it is enough to push you close to the edge.

In times like these I like to look back into history, at other times when mommas stood strong in the midst of the winds of war. World War II mommas who spent months not hearing from their deployed sons and daughters. The VietNam war when having a child in the military was decried by many. Even as recently in the first days after 9/11 when I, as a new military mom realized that everything I expected had changed.

We cannot predict the future or the threats that affect us as a nation. I think about all the places where we have troops deployed. We are now deploying troops back to Germany because of increased threats. Who would of thought? If I ponder too much flickers of fear dance around the back of my brain. I cannot give in to those fears. My job as a mom is to stay strong and to support my troops.

In the precursor to WWII Great Britain created some motivational posters. One was only to be used in times of crisis. “Keep Calm and Carry On” was advice meant to support the public during the Blitz. When I am overwhelmed with a barrage of negative thought I hold onto that message. Keep Calm. Keep Sending Care Packages. Keep Praying. Keep on Keeping on.

Is it easy? No. But life as a service member, especially in harm’s way is not easy. Doing what is right and necessary can be very hard. But we do it because it is our job as mothers to keep supporting our children in this turbulent world. Lock arms Mommas. Keep Calm and Carry On. 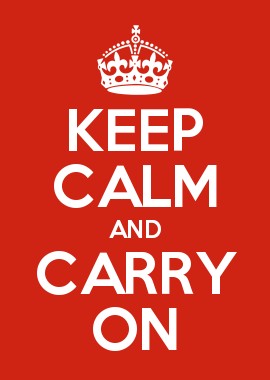